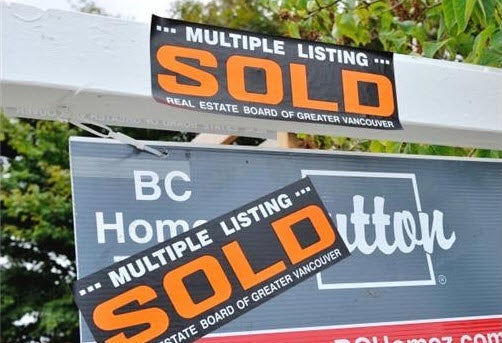 OTTAWA — Homes prices edged down 0.2 per cent in February from the month before but were still 6.1 per cent higher than a year ago, according to a well-watched housing index.

The month-over-month decline was the third such retreat in the past four months for the Teranet-National Bank National Composite House Price Index, released Wednesday, which measures price changes for repeat sales of single-family homes.

In January, prices rose 0.1 per cent.

Teranet's report showed prices falling from the previous month in six of the 11 metropolitan markets surveyed.

In Canada's two hottest real-estate markets, prices in Vancouver fell 0.3 per cent, the fifth consecutive decline, while prices in Toronto rose by just 0.1 per cent. On a yearly basis, however, Toronto prices were 10 per cent higher.

The data is likely to show up on the radar of Bank of Canada governor Mark Carney, who has repeatedly warned that Canadians are piling on too much debt as they buy homes whose prices keep rising.

At a House of Commons finance committee meeting Tuesday, Carney warned that house prices in relation to income levels are now running 35 per cent above historical norms.

Last week, the Canadian Real Estate Association reported that seasonally adjusted sales in March rose 1.6 per cent from year-earlier levels, although the national average home price declined 0.5 per cent to to $369,677.

"It is a fact that according to CREA (the Canadian Real Estate Association) data for March, five of the 11 markets covered were rather favourable to sellers (Toronto, Hamilton, Winnipeg, Halifax and Quebec City). Overall, the Canadian market is nevertheless balanced," said National Bank senior economist Marc Pinsonneault.

Article by John Morissey Featured in the Financial Post