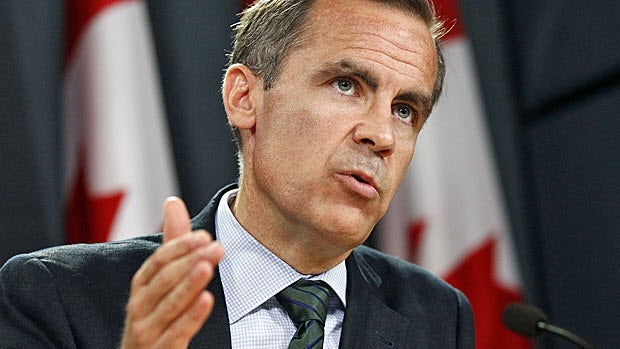 Mark Carney and the Bank of Canada may cut interest rates in light of the U.S. Federal Reserve's promise to keep rates low, some experts predict. (Chris Wattie/Canadian Press )

The Bank of Canada had been expected to start raising interest rates in September, but is now likely to keep them on hold or even announce a cut, experts say.

Canada's central bank is due to make an announcement on rates in September, on the heels of the recent decision by the U.S. Federal Reserve Bank to keep interest rates south of the border low and stable for two years.

CBC business commentator Michael Hlinka, who also teaches at the University of Toronto School of Continuing Studies, is among those to predict a cut in Canadian rates. He calls the announcement by the U.S. Federal Reserve "extraordinary" and also "short-sighted and utterly clueless."

"I've never heard of a central bank in North America ever put an extended time frame on interest rates like this," said Hlinka, not even after the Sept. 11, 2001, attacks.

"The announcement in the U.S. that interest rates won't go up any time soon is public policy makers saying to consumers, there is no reward in saving your money, so don't think about saving for your retirement or a rainy day, you might as well spend it now in the hope that this consumer spending will stimulate the economy and lead to job creation."

Canada will have no choice but to follow suit in cutting rates, said Hlinka.

"To raise interest rates would drive up the Canadian dollar, making our exports that much less competitive. Now it seems almost inevitable that the next move for our benchmark interest rates will be down."

But that could push the country into a deep and prolonged recession with record levels of private debt, according to Hlinka.

Cutting interest rates could further overheat the housing market and encourage people to spend beyond their limits, creating a bubble that will soon burst, predicts Hlinka.

He points to Vancouver, a city whose housing market has cooled considerably this summer, as a harbinger of things to come for Toronto and other Canadian cities.

BMO deputy chief economist Doug Porter said the the bank will likely keep its key overnight rate target at one per cent well into next year.

Until the recent turmoil, Porter said, he thought the Canadian central bank would start raising interest rates this fall with two quarter-point rate hikes by the end of the year.

"In fact, because of the weakness in equities there has been some talk recently that there is even a remote possibility the Bank of Canada could cut rates in the coming weeks or months," Porter said.

"I still think that's a long shot, but at the very least events have conspired to keep the Bank of Canada on the sidelines for a lot longer than most had anticipated as recently as a few weeks ago."

Andreas Park, a professor of economics at the University of Toronto, is more cautious, hedging his predictions and taking a wait-and-see approach.

"All of this is a big unknown for Canada at this point. And the Americans don't know it either."
If the U.S. government cuts spending dramatically that could have a negative impact on the economy, he adds. If that happens, Canada will be affected.

If interest rates are cut in Canada in September, it will mark five years of low rates.

Hlinka draws parallels between the Bank of Canada and its Swiss equivalent, which announced last week it was cutting its benchmark interest rate from one-quarter of a per cent to as close to zero as possible.

With unemployment at 3.2 per cent and an economy that is growing at two per cent in the midst of all the turmoil in Europe, the Swiss are the envy of the world.

"They're terrified that the appreciation of the Swiss franc is going to upset that apple cart," says Hlinka.
P.O.V.: Are you confident in the Canadian economy?

"So their public policy makers and central bank is saying, 'We'd much rather run the risk of creating an asset bubble, instead of sitting and watching the Swiss franc appreciate day after day and make the products we export to the rest of the world utterly uncompetitive,'" says Hlinka.

But Hlinka warns there is a risk in cutting interest rates.

"I feel like the wild-eyed Cassandra inside the gates of Troy who said 'Don't bring in that statue. It can lead to no good.'"

Rather than addressing fundamental economic problems, public policy makers are playing on the margins with factors that have nothing to do with what the real issues are, such as structural imbalances in the economy, says Hlinka.

"The public sector is too big relative to the private sector in the developed countries of the world. The public sector has a much better deal in terms of wages, benefits, job security, and working conditions, and it's creating a two-tier society of haves and have-nots."

"By the way, these are very unpopular things to say and I'm the first to admit it."
It's an easier fix to fiddle with interest rates, rather than tackle politically sensitive issues, says Hlinka.